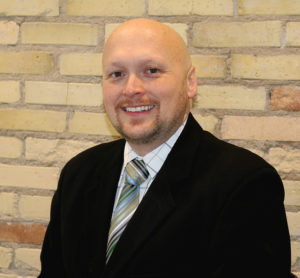 Michael W. Boyce joined the Booth University College community in 2007 to oversee the creation of a new program of English and Film Studies. He has taught a broad selection of film and literature courses at Booth, Providence College and the University of Manitoba. He is currently serving as Vice President Academic and Dean.

Michael has a BA (Hons) and MA from Wilfrid Laurier University and completed his Ph.D. at the University of Manitoba.

Michael’s first book, The Lasting Influence of the War on Postwar British Film, was published in 2012 by Palgrave Macmillan. He has written and presented papers on Katherine Philips, Edgar Allan Poe, Alfred Hitchcock, David Lean and Alec Guinness. He is currently working on projects as diverse as crime and criminals in post-war British film, Doctor Who and “Arrested Development.” He is a founding fellow in the Canadian Institute for the Study of Pop Culture and Religion and is a member of MLA, FSAC and SCMS.

In the classroom, Michael wants to engage his student with texts, be it literature or film, in new and exciting ways, encouraging them to bring their perspectives to class but always to be open to the views and experiences of others.

In his spare time, Michael enjoys reading and watching theatre, films and TV on DVD with his wife, Rachel. He firmly believes that there are few things more enjoyable than good food with good friends.