Located in Winnipeg, Manitoba (Canada), Booth University College is a Christian institution rooted in The Salvation Army’s more than 150-year history of meeting the needs of the most vulnerable in society. Deeply committed to social justice, we blend Christian faith and rigorous scholarship with a passion for service. Our approach to learning is anchored in academic excellence and based on a vision of social justice, hope and mercy for all.

For today’s changing world, students should be well versed in literature, philosophy, history, religion, the fine arts, and the social and physical sciences. With this foundation in place, our students are prepared to pursue knowledge in their chosen field of expertise. Whether that field is the humanities, the social sciences or a professional degree, exposure to the broad range of human knowledge makes our graduates better people and better citizens. The integration of this knowledge with a Christian world-view prepares our students to explore the boundaries of knowledge with courage and commitment. With the mentoring care of committed professors and instructors, we expect our students to tackle the most difficult and complex issues of our day with hope and confidence.

OUR COMMITMENT – EDUCATION FOR A BETTER WORLD:

Booth University College’s commitment is to provide Education for a Better World. We educate students to understand the complexities of our world, to develop the knowledge and skills necessary to be active contributors to society and to know how Christian faith compels them to bring hope, social justice and mercy into the world. We go beyond preparing students for a career. We prepare and inspire them to go out and make a meaningful difference in their communities and the world around them.

As a Christian university college, Booth UC’s mission is shaped by the biblical realism which acknowledges that the world, although created by God and therefore endowed with the goodness and beauty of God, nevertheless is deeply troubled. Alongside the richness of this world and the dignity of human life, we recognize that we live in a world that has fallen short of the glory in which it was created.

We want our students to see the beauty of the world, and yet to be informed about the challenges of life together on this planet—the challenges of an environment which is in deep distress, the challenges presented by societies and social systems that are voracious in their appetite for “muchness and manyness,” and the challenges of injustice which spring from self-interest run rampant.

As a Christian educational institution, we explore the world as it is, with its mix of splendour and violence, its mix of despair and hope, its mix of injustice and a longing to do better. Much of our work together is an effort to expand our understanding beyond what we have always thought, known or believed.

But as a Christian university college, it is imperative that we do more than simply understand the world as it is. We must also look beyond what currently exists, beyond the constraints of the moment, to envision a better world. We must prepare our students not only to identify and understand the challenges of the present but also to envision solutions for the future; not only to explain why the world is as it is, but also to work to make it better; not only to comfort those who are suffering, but also to heal their wounds.

It is for this reason that our commitment, Education for a Better World, is central to the mission of Booth University College. Our goal is to educate our students so that they can live lives which are informed by the discipline of their minds and transformed by Christian faith. We want to prepare our students to be both willing and able to work hard to bring this better world near. 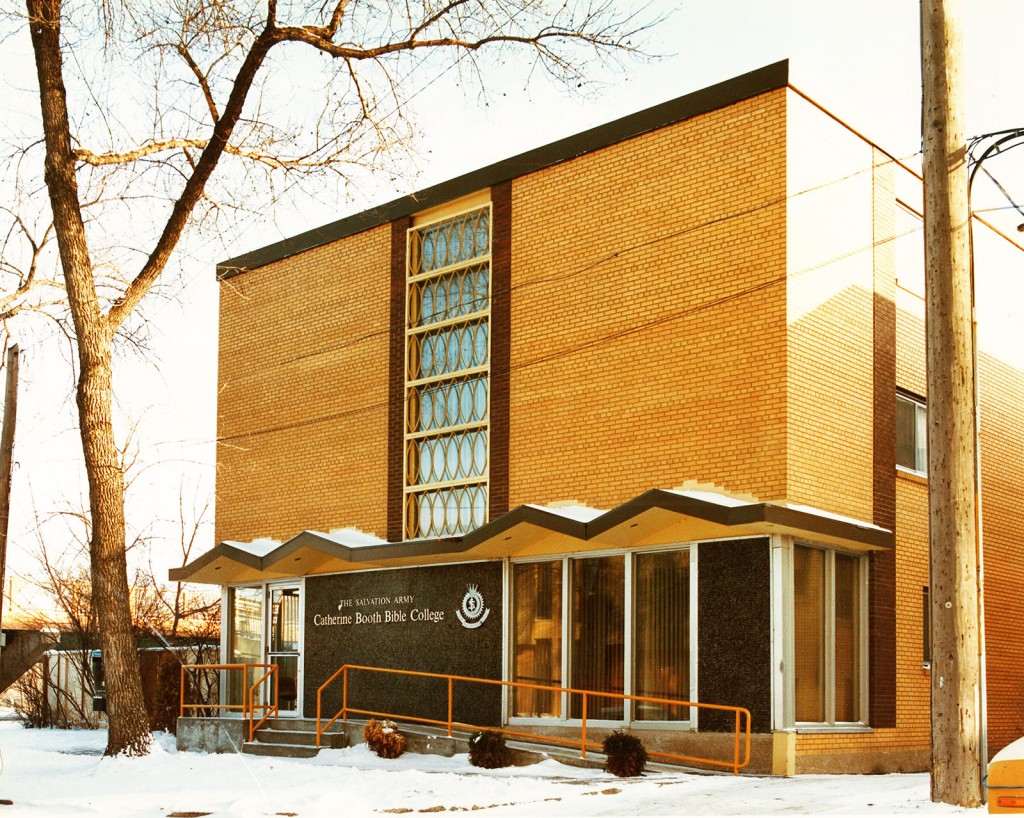 First established as a centre for biblical studies and leadership training, Catherine Booth Bible College was founded on February 16, 1981. It was located at 340 Assiniboine Avenue, situated on the banks of the Assiniboine River.

The establishment of a Salvation Army “university of humanity” was first proposed by The Salvation Army’s co-founder, General William Booth, early in the 20th century. While from its early years The Salvation Army has operated Training Colleges for the preparation of its officers (clergy), throughout the Army’s first century the dream of a “university” devoted to accredited, degree education was left unfulfilled.

When on February 16, 1981, the Canada and Bermuda Territory of The Salvation Army announced that it would establish a college in Winnipeg, the fulfilment of that dream began. Because of the vision of Commissioner John D. Waldron and others, Catherine Booth Bible College opened in September 1982 with 28 students. Under the leadership of Colonel Earl Robinson, the institution grew rapidly with the development of programs and the move to its current campus in 1988. In 1986 the foundations were laid for the institution’s social work program and in 1989 Booth launched its degree-completion program for Salvation Army officers. Then in 1997, the name of the institution was changed to William and Catherine Booth College.

FROM BIBLE COLLEGE TO UNIVERSITY COLLEGE 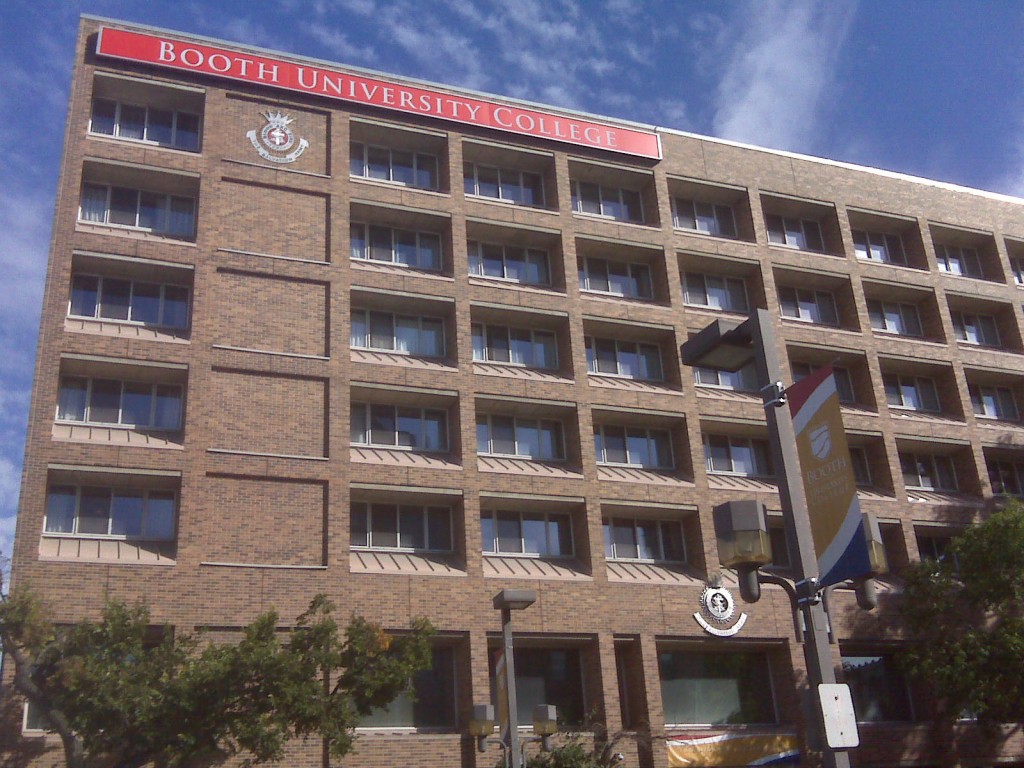 To meet our growing needs, in 1987 we purchased the current seven-story Webb Place building – formerly the YWCA – in downtown Winnipeg. This new campus opened to students in September 1988. In June 2010 the Legislative Assembly of Manitoba passed legislation that gave Booth ‘university college’ status and we officially changed the name of our institution to Booth University College.

While the institution was established as a “Bible college” and vigorously implemented that model of post-secondary education, by 2006 the needs of The Salvation Army and society-at-large had changed. As a result, the Board of Trustees cast a new vision for the institution as a “growing Christian university college of choice,” with an expanded mission that resembles more closely William Booth’s dream of a university of humanity.

Since 2006, Booth has undergone a significant transformation. New programs have been developed and existing programs have been redesigned. Our enrolment has grown dramatically. In June 2010 the Legislative Assembly of Manitoba passed legislation that gave Booth ‘university college’ status and we officially changed the name of our institution to Booth University College.

Now it’s time to look beyond the present to envision and shape the future of Booth UC as a growing Christian university of choice. Achieving this next stage of our mission requires a vision designed to move us forward with clarity and purpose. We envision Booth University College in new ways. As a result, we see: